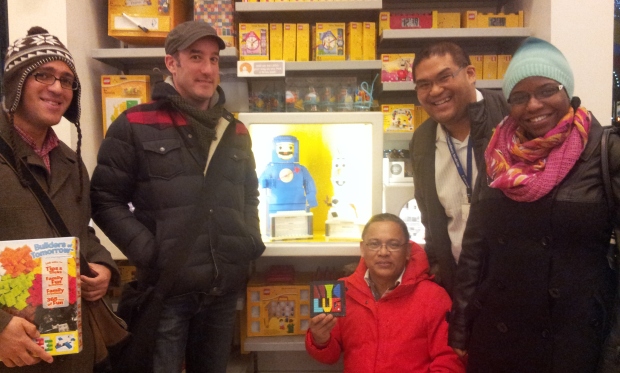 Members of NYCLUG got together Friday evening at the LEGO Store at Rockefeller Center to install their first-ever LUG Community Window Display.   END_OF_DOCUMENT_TOKEN_TO_BE_REPLACED

We’ve just updated our Members page with some short bios on your fellow NYCLUGers.  Please check it out and remember, feel free to email us: join (at) nyclug (dot) com!

Like Loading...
First founded in the mid-aughts, NYCLUG — the New York City LEGO Users’ Group — brought together like-minded Adult Fans of LEGO, or AFOLs, who lived and worked in the five boroughs of New York City.  We held two or three meetings before disbanding, simply because it was difficult to get our schedules coordinated.
NYCLUG was short-lived.
But as we’ve entered an era dominated by social media platforms like Facebook, Twitter and Instagram, along with other online resources such as blogging and even Google Hangouts, NYCLUG is now able to adapt itself to be less burdensome on its members, while still allowing us as a LUG to flourish and bring notice to the great works done by its members.
And so, NYCLUG is formally reborn!
NYCLUG comprises members who either LIVE or WORK in any of New York City’s five boroughs (Staten Island, Queens, Brooklyn, Manhattan and the Bronx), or who are “legacy” members — that is, original members of NYCLUG from when it was first established years ago.
We have received formal recognition as a LUG by The LEGO Group and, to date, comprise ten members from in and around New York City.  As stated, NYCLUG will primarily live online, but we will hold a handful of in-person meetings during calendar 2014 and beyond.  We will be codifying membership rules and will issue them in early 2014.
If you are age 17 or older and want to inquire about joining NYCLUG, please send an email to NYCLUG (at) Gmail.   You can also find us on Facebook or Twitter.
Leg godt and happy new year!
Sid

Need BRICKS? Get BRICKS on the Dollar!

Inspiring The Next Generation of LEGO Builders

Lightsaber Hilt is for the fans, by the fans. We try to bring you the hot news, the cool pics, the hard quizzes and anything and everything to do with Star Wars!

4 out of 5 dentists recommend this WordPress.com site

Dave's Corner of the Universe

Smile! You’re at the best WordPress.com site ever

The Dystopian Nation of City-State

Your Source For The Coolest Science Stories