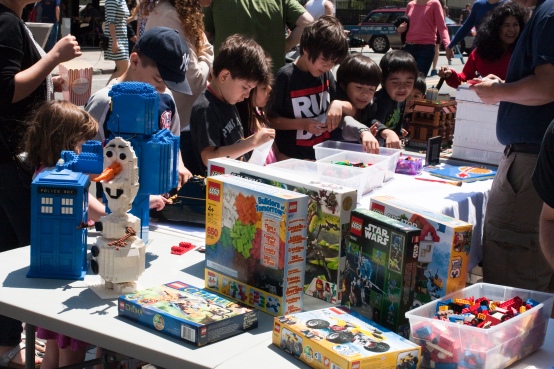 NYCLUG members Kent, Moa Victor and Sid were on hand as NYCLUG hosted its first-ever Community Build Event at the massive LIC Springs block party on Vernon Boulevard in Long Island City, Queens on May 17.The afternoon’s festivities kicked off Saturday afternoon in front of Modern Spaces LIC, a prestigious New York City real estate firm that wanted to bring an interactive, family-friendly element to their sidewalk and mid-street presence.

NYCLUG member Sid talks about LEGO with a visitor in front of Modern Spaces in Long Island City, Queens

NYCLUG more than obliged, bringing three tables worth of LEGO elements and MOCs, LEGO sets that were raffled off as prizes to happy winners, and even a couple of Queens and LIC landmarks such as the Ed Koch Queensboro Bridge and the iconic Pepsi-Cola sign that fronts the East River.

A visitor enjoys the mini version of Queens, replete with a Queensboro Bridge, as NYCLUG member Victor Ty looks on

Hundreds of family members stopped by to participate in freebuilding and to learn a tip or two from the NYCLUG members present, and some even got to take home their MOCs; NYCLUG also garnered some great press (special thanks to the Queens Tribune and Brownstoner Queens for the mentions!) and praise from one of the event’s organizers.  Among the big hits: Victor’s buildings, which dominated the tables, along with the ever-popular Benny “maxifig” and Olaf from Disney’s Frozen. 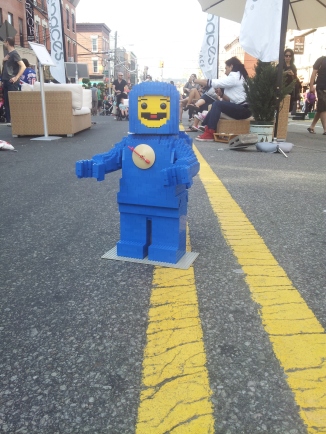 We’re hoping to make a return to LIC Springs next year. Until then, thanks for the memories, LIC!

Need BRICKS? Get BRICKS on the Dollar!

Inspiring The Next Generation of LEGO Builders

Lightsaber Hilt is for the fans, by the fans. We try to bring you the hot news, the cool pics, the hard quizzes and anything and everything to do with Star Wars!

4 out of 5 dentists recommend this WordPress.com site

Dave's Corner of the Universe

Smile! You’re at the best WordPress.com site ever

The Dystopian Nation of City-State

Your Source For The Coolest Science Stories